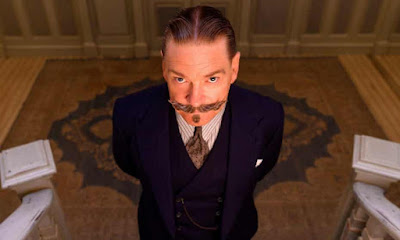 Kenneth Branuagh's reinvention of Herciule Poirot continues with an adaption of the Agatha Christie's DEATH ON  THE NILE.

Beginning with a flashback to World War One the film explains why Poirot has the mustache he does.  The film then jumps to the present and the story of Poirot helping a newly married socialite evade a jealous ex-friend whose fiance she had stolen and married. When the socialite is killed Poirot investigates.

While the central mystery remains the same as in the novel, the film juggles thing, bringing in new plot points and characters while removing others from the novel.

I really liked this adaption of the novel. Its different enough to stand on it's own legs. It's spectacular to look at and I was thrilled to get to see the film in 70mm. It is also strangely emotional for a murder mystery since in reinventing the narrative threads the film takes on a deeper emotional resonance. While the film is techincally much too open mined for the time period when it comes to some subjects (particularly with matters of race and sexuality) it perfectly fine for today's audiences.

What is a strong selling point for the film for me is the arcing of Poirot. He isn't static but changes, as can be seen by the whole thread of the mustache. I love how we get a deepening of the character. I love how we find out how flawed a person he is. If you think about this film and the previous in the series, Poirot solves the crimes, but he does so at a terrible personal cost. People die because he isn't fast enough. Several times I was deeply moved emotionally in unexpected ways. (I can not tell you lest I spoil a turn or two). Hopefully we can more films with the detective, if not several at least one, which I would hope to be the final tale CURTAIN, which would take the idea of Poirot's having his successes have a terrible cost to the logical conclusion.

If there is any real flaw in DEATH ON THE NILE it's in the editing of film. After it was finished actor Armie Hammer was charged with rape and assault. As a result the studiohad him removed from much of the promotional material. Additionally, it would seem that the film may have been edited to remove him since there is a point where his character goes completely missing for a long period of time, returning only for a couple of crucial scenes. While I haven't heard anything officially the film feels like bits were removed in the second half.

Flaws or no, Branagh is the story here and his invention, or reinvention of the great detective is stunning and worth the price of admission.