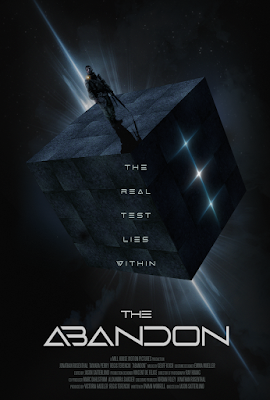 A soldier is shot during an attack and he wakes up in stone room with all his gear. As gravity and the parameters of the room shift, he some how connects via satellite telephone with a woman seemingly in a similar room. Together they will have to fight to figure out what is going on.

As one room films like CUBE go, this one pretty good. The vast majority of the have premises that don't allow for the film to remain interesting for more than say a half an hour usually because the script tells you too much too soon. The script for THE ABANDON is intriguing enough that you end up watching to the end because you have to to know how it comes out.

And I don't know how much more I can say. The problem is not that I don't have things to say its that enjoyment of the film hinges on taking the trip in the film in order. Knowing things too early will alter how you feel about the film. I didn't know anything so everything was a surprise.  I don't want to take that away from you.

I really had a good time with this film. It took a subgenre for which I don't have a lot of love and made it something interesting..