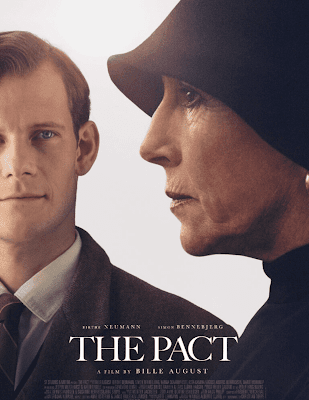 The Pact is a film version of Thorkild Bjørnvig’s autobiographical; recounting of his relationship with author   Baroness Karen Blixen, who under the name Isak Dinesen wrote Out Of Africa. Blixen seemingly randomly picked Bjørnvig to be her protégé. In return for unwavering loyalty she promised to make him a well known writer. The cost was the partial destruction of his life away from  Blixen.

This is a well-made and well-acted film that I didn’t connect to. This is not to infer that that the film is bad, rather I didn’t connect emotionally. From the minute that Blixen told Bjørnvig that she had not read his book I disconnected because to me it was just a rich woman messing around  with a poor guy who didn’t know better. While I would be interested in getting help to become better known as a writer, I’ve seen too many Faustian bargains that went south in the lives of people around me and seeing it on the big screen didn’t give me any sort of pleasure.

While I know it’s a true story (more or less) the film never answered one of the questions I always ask myself when I see a film that I’m not sure of, which is why am I watching it? Specifically is there something in this story or film that gives me a reason to continue watching.  The film never answered that, and when I got to the end my over whelming thought was “that was a thing.”