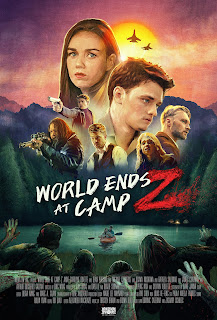 In the wake of a camp ground being sold, the zombie apocalypse happens.

Uneven comedy horror film isn't really a horror film for a good portion of the film as we get a great deal of exposition and character development before the film shifts gears and the zombies attack. It's on odd mix in that the zombie material, while good kind of seems out of place. In a weird way it kind of feels like this was supposed to be one thing and then the producers kind of realized that more people would watch the film if we put some zombies in it. I know the monsters are what drew me to the film.

While the film isn't bad, it's actually pretty good as these sort of low budget films go, it is kind of schizophrenic in that its trying to be two things at the same time and sort of short selling both.

That being said, it's still worth a look for zombie fans since it is better than many other zombie films out there.