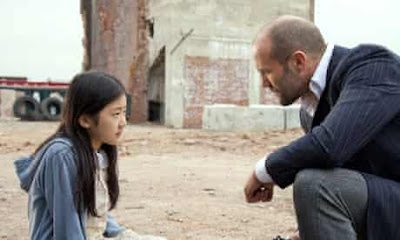 Mean and nasty Jason Statham action film has the actor playing an ex cop working as an MMA fighter for the Russian mob. When he wins what is supposed to be a fixed fight the mob kills his family.  When he sees a young Chinese girl being chased by Russian mobsters and some corrupt detectives Statham steps in and rescues the girl who is in NYC as a courier for the Chinese mob- she has memorized a long series of numbers.  Statham and the girl now have to fight to remain alive and possibly get justice for his dead family.

Balls to the wall action film makes almost no sense. It really doesn’t matter since the film moves like the wind. It’s a crazy ass action and piles of dead bodies as Statham does everything he can to wipe out everyone who might have wronged him. It’s an action ballet of the best kind.

I know some people don’t like this film because the film because of the illogic of the plot, but at the same time they love the wild shoot outs which involve physically impossible stunts , something that is more out in left field than the plot.

Say what you will I loved the film and was entertained for two hours which was enough for me.