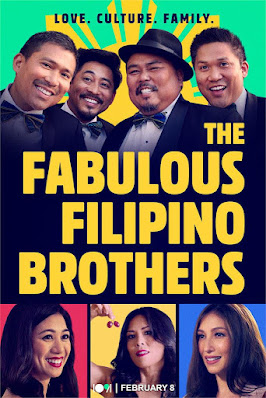 This film is nominally the story of a group of brothers as they get ready for one of their number’s wedding. It’s a typical family comedy spiced up by a real sense of family. The result is a wonderful film that will delight you and make you smile from ear to ear for 100 minutes.
When I started Fabulous Filipino Brothers I was struck by how perfect the kibitzing around the kitchen table was. I couldn’t believe that anyone cast people this absolutely perfectly. I mean the rhythms of the chatter was exactly like being in a room with close family and everyone talking over each other. And then I realized that the brothers are all related and I completely understood why it played so perfectly.

This film is an absolute joy. Yes it is a scripted film but the family connection raises this film to another level. It’s a film that feels lived in. It feels at time like they copied actual conversations and then recited them back. More importantly there are moments where the reaction to things happening on screen seem genuine. People are reacting instead of acting and it feels more real. Watching some of the big family sequences I was watching the back ground actors and how the behaved or reacted to what was happening in the foreground was genuine. Its not something you normally would notice, but several times I caught little reactions and it made the film all the more real for me because no one is that good an actor.

Yes the main story line doesn’t carve out any new territory, but at the same time the characters and their reactions are so perfect the plot is secondary. You aren’t gong to remember the plot, rather you will remember the people.