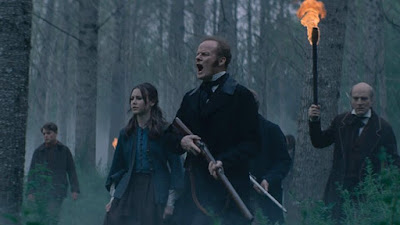 With THE CURSED opening Friday I'm reposting my Sundance review from last year. If you want to know how much I love this movie it was on my list of the best films from 2021

Wonderful horror thriller is kind of reinvention of the werewolf genre as a bunch of rich land owners wipe out a band of migrant Roma clan. Before the last one dies they curse their killers and the land setting up a horrifying nightmare of revenge.

Part historical drama, part horror film EIGHT FOR SILVER is a film that straddle genres and comes across as something truly special. Its so special that I was not prepared for it's refusal to play by any rules other than it's own. Its a game changing throw back to the sort of films that Hammer used to make except that it has its own style that makes you wonder why no one has done anything like this before.

Its a nail biting film that will have you on the edge of your seat as the film takes you places you've never been before. Its not the story, we've had the  sins of the fathers destroying the children before, rather its novelesque telling of  story that feels more real than the literary stories tat spawned it. This is a tale that felt like it could have been true.

Oh you have got to see this one. Trust me.

And please forgive me for not saying more because I am soooooo tempted to tell you everything. This is the sort of a film you want to grab the person nearest you and talk about for hours.

Hands down the best genre film at Sundance. It is an absolute must.