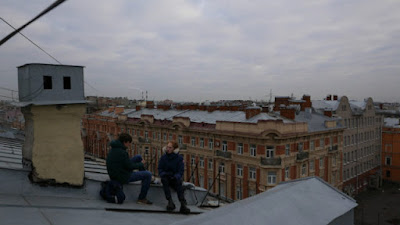 Cinematic essay about how 100 years ago Soviet thinkers thought the future would be red and that we would be living on Mars in a grand society.  Weaving together various streams of thought the film bounces from the wide open plains to the roofs of Russia to look at the past, how those living there saw the future and ponder how we ended up here.

Like most other essay films Red Star is hard to write up. Its not so much that there isn’t a lot to say, there is, the film is full of all sorts of thought and moments that will produce “ah ha”s from you; rather it’s simply that this is the sort of  film where you are taking a ride on a train. Yes I could tell you where it goes and what you’ll see, but that will take a great deal of fun out of the film. Personally I loved that I could go into the film more or less blind and simply allow the film to drive me across the world and on to Mars.

The best thing I can say is if you want to take a trip across time and space buy a ticket and take a ride.