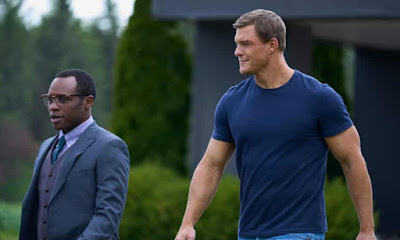 The Amazon Prime series Reacher is a winner.

Way back when the initial embargo had lifted I wrote a short piece after I saw the first wo episodes saying that it was a great series and that you should watch it. Now that it’s out and I’ve seen the whole series I’m doubling down and saying it’s must see TV

Base on The Killing Floor the first Reacher novel the series has Jack Reacher wandering into a small town. Nominally he wants to track down the home of a legendary blue musician and perhaps connect with his brother. However he soon finds himself arrested for murder, he’s the lone stranger in town, and he discovers, his brother is one of the victims. This sets him off on the quest to get justice for his brother, which means fuffling a lot of feathers and killing a lot of people. (A running “gag” is the number of people who have died since Reacher came to town)

This is a great series and light years about the Tom Cruise Reacher films. While those film were fast moving action films there wasn’t room for character development and as a result it was all short hand. Here we get great characters and room to breathe. Lee Child who wrote the series is on record as being happy with the series and upset that Willa Fitzgerald can’t continue in the next series as Officer Roscoe because the series allowed the actress to improve his character.

Alan Ritchson is perfect as Reacher. He looks big but isn’t menacing but when things happen you realize how much of terror he is. He is also not the Cruise version of the character because it’s made clear on numerous occasions he just will bust you up or kill you because it’s easier. Yea Reacher is a hero but he has a black side

When I returned to the series after two film fests I rewatched the second episode and then did two more. I then got up in the morning and watched the remaining four before going out to do my things for the day. I simply had to see how it came out.

I love the series and hope Amazon continues it