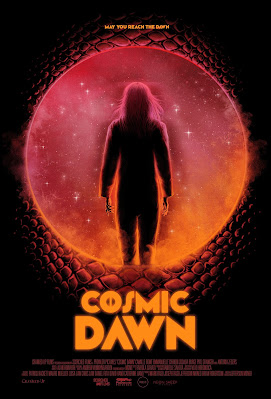 Years after a woman left a UFO cult she joined after her mother had been abducted a woman returns to the fold to try and sort out what is going on.

Retro feeling scifi thriller feels like this should have been made in the 1980’s.  It’s a familiar, yet not film that keeps us feeling slightly off balance because it simply refuses to behave as recent movies have trained us to.  This is one of those movies where you are watching it certain that it is going to go a certain way and then it takes another path. Yes you can kind of guess where it is heading generally but there is no way you’re going to sort it all out, . I was delighted that the ending was really not what I thought it would be. (I was also delighted at the needle drop end credits music because I am a decades long fan of the group Klaatu)

To be honest I had a blast watching this. I had to make time in watching films for Sundance and Slamdance to see this and Cosmic Dawn’s throwback charms were the a joy. It’s a nostalgic homage to the 1980’s B genre films that played in theaters fleetingly before hitting home video. This was mana from heaven for me, a guy who used to travel miles and miles to see any genre film in tiny out of the way theaters across Southern New York.

Is this the best film in the world? No, but it is entertaining in a curl up on the couch on a Saturday night sort of way.