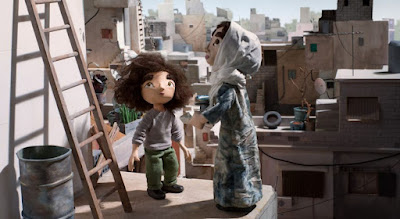 I never lost hope. You were my hope.

THE TOWER kicked my ass. It left me staring at the screen weeping and wondering why it has taken me three years to have the film placed upon my radar.

The film is the story of Wardi a young girl living in a Palestinian refugee camp. Over the course of a day she connects to the story of her family and friends as they relate to her the story of how they ended up in the camp and express to her their hope and dreams for the future.

Told in a mix of stop motion (the present) and 2D animation (the past) the film quietly tells the story about how Wadi‘s family and the other people in the camp came to be there.  Through the telling of the story we see the dreams and hopes of everyone. We see how despite it all how we humans still hope and dream despite being  in dire situation.

What makes the film work is that the film doesn’t play anything except as a straight forward expression of life. There are no stereotypes. The characters (which are based on real people) are really just people.  There is no real effort to heighten  the emotion. Even the Israeli soldiers are not demonized even as we see the bad things they did. This insistence of keeping it low key adds and not preaching emotional power. We truly feel  for everyone on screen because they truly our us.

I love this film to death. It is a glorious celebration of life and humanity.