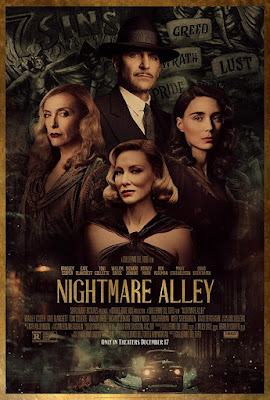 Nightmare Alley is the latest from Guillermo del Toro and it is a new cinematic version of the tale that inspired the classic Tyrone Power film.

The film has Bradley Cooper joining a traveling carnival, learning the tricks to fool the rubes. He then moves on from the carnival, reinventing himself as a psychic, enthralling the wealthy of Buffalo. He then begins a dangerous game of scamming several of the wealthy with the aid of a therapist.

This is a technically brilliant film that is stunning to look at. This is an old school Hollywood film done large as life and in full color. I absolutely love the craft of the film.

The cast is wonderful, with Bradley Cooper turning in an actual performance for the first time in many years. While I have always liked Cooper in the past, he has essentially been playing a version of himself for the better part of decade. This is the first time he actually disappears int the role and we are better for it.

As much as I like the film, I don’t love it.  While it is Guillermo del Toro operating at the top of his game, it is also his one film that doesn’t seem to have his fingerprints on it. If I were pressed to say who directed it I would never have guessed del Toro.

Another quibble I have is the structure of the film is odd. First the film is very much two films with the same characters. Yes I know it’s one story but the first hour seems like it’s a completely different film than the final hour and a half. The division for me  is such I almost wished there was an intermission once Cooper leaves the carnival. Additionally there is a forced sense of call and echo in the film where a number of plot points and statements made by characters in the first hour that come back to haunt everyone one in the second. You can feel the filmmakers working very hard to make sure that every warning given to Bradley Cooper comes back to haunt him from believing his own ability to how one becomes a geek. Its not done subtly by forcefully, and the instant Cooper id warned you know its gonna bite him. I wish it had been done better so I went “oh crap” instead of “saw that coming”