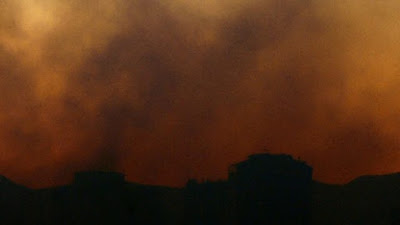 This is a reconstruction of the 2010 San Miguel prison fire in Santiago, Chile that took the lives of 81 people. The fire started during an altercation between factions in the prison and officials didn’t spring into action to stop the violence or the flames. The film is a reconstruction using the evidence from court proceedings consisting of documents, CCTV footage, photographs, eyewitness testimony and news reports.

Slowly building and hypnotic in a way The Sky is Red is like watching a terrible car accident in slow motion. You know how it’s going to go but at the same time you are powerless to stop it. It is a kind of waking nightmare because very early on you realize that the whole thing was a kind of foregone conclusion with the construction of the “houses” in the prison dooming everyone from the outset.

I was horrified at how it went down with one prisoner saying that the guards he  was trying to tell about the fire didn’t care and effectively said let them burn.

While the pacing of the film can seem slow, there is no narration and you have to pay attention, the film is a kick in the chest of slowly building sadness. Yea the victims may have been prisoners but no one should die like that