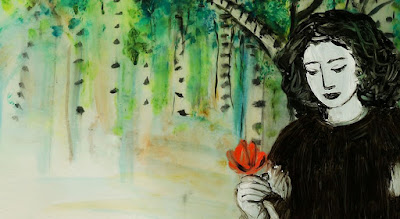 Florence Miailhe‘s THE CROSSING is opening this year’s Animation First and it’s a killer film.

The film is a memory tale of woman reflecting back on her escape many years before from an unnamed “Eastern European” country.  Kyona and her brother were in the forest with her brother when black hooded militia came into their village and told them to get out. Returning to the village she and her family make plans to flee. However circumstances at the train station result in Kyona and her brother being separated and fleeing. They then must flee across country to try and find freedom.

This is a bittersweet tale of survival. While we know that Kyona survives, she is telling the story, we can’t be certain about anyone else. As we quickly learn bad things happen and the possibility of death is all around. This is a tale that had it been made live action it probably would have been rated R. That’s not a knock, more a warning to parents who see the animated images and think this film is going to be great for their kids. No it’s not. This is very much a film for adults.

Since the film is a memory play, the narrative an seem a bit disconnected at times. Things don’t flow perfectly but we will forgive it because the film uses Kyona‘s sketch book to link everything up.

If there is any potential problem with the film it’s going to be in look of the film. It was created by painting on glass (they show the process during the end credits)  and seems more like a moving painting than a typical animated film. The colors remain bright even in the darkest time. I personally was mixed on the look of the film since it didn’t always connect to my personal taste. At the same time the struggle for survival kept me fully engaged as I waited to see what would happen.

This is a one of a kind film an if you are a fan of animation or compelling survival stories this is an absolute must.