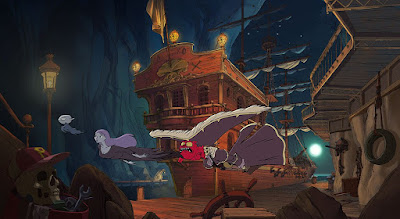 LITTLE VAMPIRE is a blast.

Based on the graphic novel by director Joann Safar, it is the story of a little boy and his mom who are captured by the mother's spurrened lover. They are saved from being sacrificed  to the God of Nothingness by an undead pirate captain who turns them into vampires and begins to romance the mother. Annoyed with losing his sacrifice the God turns the spureened lover into creature who then pursues the boy and his dfamily across time. After 300 years the little vampire wanders off and makes a friend in the human world.

A magnificent story about family and friendship is given spooky piratical dressing by Safar who has made one of the most delightful animated films I’ve seen in a while.  This is a spooky film that really isn’t and reveals the specialness of friendship and family in ways that Hollywood films could never manage. What an absolutely joy.

Why isn’t this film getting more play? This is everything that Hollywood wants in a film and then some. This is something special like THE NIGHTMARE BEFORE CHRISTMAS but without the songs.  What I love i that this is a multi level tale where the adult themes will hold the parents as the kid stuff delights the litte ones. I love this film.

It’s a must see at Animation First. 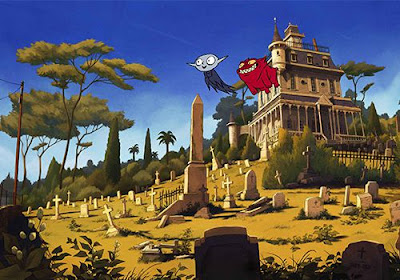