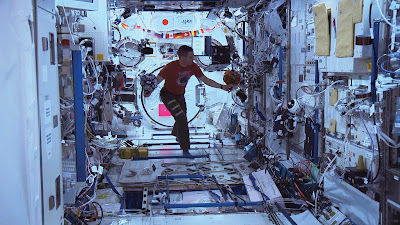 In California a teacher and a group of kids from various backgrounds take part in the Zero Robotics competition, The kids will have to code a robot so that it will do a series of tasks. The competition will have them compete other schools across the country. The kicker is that the robots are located on international space station.
Very good documentary about a bunch of kids leaning to love coding and science. This is a really cool little film that transcends a basic idea of a school competition and makes it into something more. Seriously this film made me go wow and I'm not talking about the spectacular space views but the idea that they have to deduce how to move a robot moving in zero gravity. The idea that they are programming something that they probably didn't understand amazed me.
I know that doesn't sound cool, but trust me it is.
Also really cool are al the people we meet. I kind of fell in love with everyone on screen.
This film is great fun and recommended a when it plays at The New York International FilmFestival this weekendand the Prt Jefferson Documentary Series May 2nd
Posted by Steve Kopian at March 01, 2022