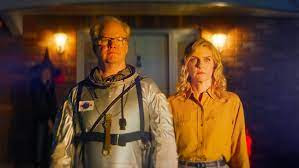 When a satellite falls from orbit and crashes into the home of a dysfunctional family in suburban Ohio, the father seizes the opportunity to fulfill his childhood dream of becoming an astronaut by re-creating the machine as his own rocket ship. While his wife and daughter believe he is experiencing a midlife crisis, surreal events begin to unfold around him, forcing him to reconsider how interconnected their lives truly are…

In Linoleum, Cameron hosts a small science show for kids called “Above & Beyond.” With his marriage on the verge of divorce, his children, and his job disrespecting him, a strange crash landing in his backyard reignites his aspirations of being an astronaut. But, Linoleum is not what you’re expecting. It’s a manifestation of memory and dreams.

Rhea Seehorn as Erin is amazing. The nuance of this performance is extraordinary. Take notice of every single beat. Katelyn Bacon plays Nora with sass and innocence that blend to perfection. You cannot help but sit up and pay attention when she’s on-screen.

Jim Gaffigan is adorable. And yes, I did use that term to describe a grown man. His childlike wonder drives Linoleum‘s tangible whimsy. Do not overlook the emotional journey of this character.

Be on the lookout for the appearances from Tony Shalhoub and Michael Ian Black. The score is light and sweet, perfectly setting the tone for a film that pulls at our grown-up heartstrings. Linoleum is ultimately more complex than you’ll see coming. Filled with surprises, writer-director Colin West has given SXSW22 audiences something special. It’s a bit of a wonder. Linoleum begs multiple viewings.