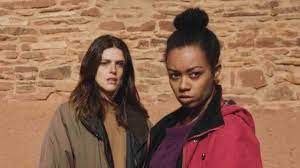 While staying in the desert home of her grandmother Elena runs into high school friend Jessica who is fleeing from her stalker. When the stalker shows up things get complicated.

This is nominally a horror film. I mean it involves horror tropes, a stalker, the supernatural and a few other things, but it’s not really a horror film. The press material calls it a dark comedy, but it’s not really funny (even if the stalker’s speech pattern is kind of played for laughs). This is really a solid drama with twists and turns. And I can’t discuss the turns because the turns are what propel the film forward. That isn’t to say the turns are everything, rather they provide “oh that’s what that is” moments that keep us hooked. And I need to point out that almost all of the turns aren’t really turns but things that are always on screen. Frankly I haven’t seen a film that is this scrupulously honest in a very long time.

The only real problem I have with the film is that it has a couple too many endings. I kept thinking “and that’s the end” only to have it keep going. I would say trim things back, except that this film is barely feature length as it is (it runs 68 minutes with credits).The endings are all fine, just, some are better than others.

Quibble aside this is a one of the best films at SXSW and recommended.