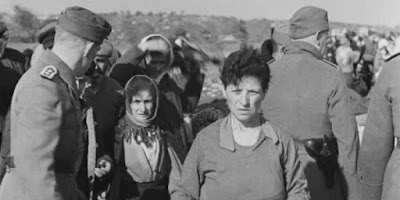 This is a recounting of the events at Babi Yar, near Kiev wherea mass execution happened when the locals turned on the Jewish population. Made up of documentary footage from the period it reveals what happened before and after the massacre.
Belt in boys and girls director Sergei Loznitsa is at it again and he is fashioning a real gut punch of a film. Unlike most recent films of a similar nature there is the distance factor of the time, however as Loznitsa has shown from his earlier films there is nothing like using period footage to bring home the weight of historical events.
I was rocked. Not because  there is anything graphic in the film but ore because everything we see brings home how this was an event that happened to people. They are not long ago and far away but right up there on the screen.
Even if the film wasn't as good as it is, the weight of the recent invasion of Ukraine would make this film a must see.
If you can't see the film at First Look the film will hit theaters, beginning at New York FIlm Forum April1.
Posted by Steve Kopian at March 14, 2022