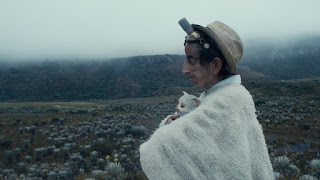 VANISHING FOG has a narrative that is kind of free form. Nominally it is the story of a couple of people in the mountains, but  the film drifts into all sorts of directions with the result the film is an experimental/visceral  experience of the highest order.

I’m not going to lie and tell you had I had any clue as to what I was watching. I had none. I could tell you what I kind of pieced together while I was watching it, but I don’t think that’s fair. This is a film that will cause a different reaction to every viewer.  What you get out of it is going to be different than what anyone else gets out of it because of what you carry into it. How it plays for you will be determined by how far you are willing to go with it magical and surreal realism.

If you want a one of a kind viewing experience, this film is for you.

I will stress that this is a film you’ll want to see on a big screen. The images, camera moves and juxtaposition of images are amazing. Watching the film on a screener at home I rewatched several sequences because they just blew me out of the water.

What a magnificent achievement

While not for all audiences VANISHING FOG is for people who love what cinema can do or for those who want as off Hollywood as you get.