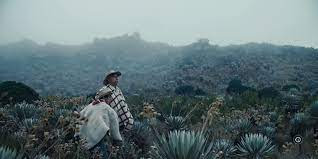 Facing the imminent return of an unnamed social and ecological violence, F – played by the emblematic and commanding newcomer Sebastián Pii in his debut cinematic role—yearns to overcome his human limitations and plan his escape, knowing all too well that his departure will come with a heartrending goodbye to the only world he has ever known.

It should be no surprise that A Vanishing Fog won the SXSW22 film festival award for Best Cinematography. This film not only speaks to the race against the climate crisis, but The Vanishing Fog also specifically tackles the helpless human aspect. The film follows a young man named F. He appears to be the last protector of an enormous and lush hidden landscape. As capitalist outsiders seek to buy his home, F’s internal struggle between escape and loyalty is palpable. Caring for his ailing father, attempting to communicate with any possible remaining ally by yelling out into the abyss, F understands the end is nigh, whatever that form may take.

First-time cinematographer Gio Park shot A Vanishing Fog in the mysterious and formidable Páramo of Sumapaz—the largest swath of alpine moorland in the world. It is the first feature film to be shot in this location. You won’t believe such a place exists. It is so incredible that it looks to have been created on a soundstage or green screen. It will take your breath away.

A Vanishing Fog is a film that deserves enormous screens. Imagine sitting in a room surrounded by IMAX-sized walls. The film begs this experience. I could easily see this becoming a staple at any museum. Lead actor Sebastián Pii leaves every ounce of himself in this role. He’s charming, innocent, desperate, endearing, and determined. You are right alongside his emotional journey. Visual grandeur aside, Pii captures your heart with his wonder and physical fearlessness. A Vanishing Fog is unlike anything you’ve experienced before. It’s a must-see.