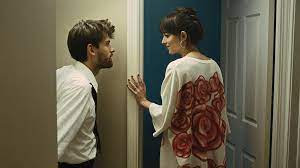 My feeling toward Cooper Raiff's CHA CHA REAL SMOOTH is summed up by the warning one learns very early when going to or following news out of film festivals which is beware anything anyone tells you because it is invariably wrong. More times than not writer, myself included, are caught up in the moment and something you see produces a reaction that over sells the film. Such is the case with CHA CHA, a film many of my friends over sold when it played at Sundance.

Director Cooper Raiff plays a young man, just out of college who is stuck working at Meat Stick and acting as a guy who can get people to have a good time at various parties. He meets Dakota Johnson and her daughter at one and is smitten. They bond despite her having a fiance in Barcelona. What will happen?

How you feel about the film will be determined by how you feel about Raiff as a leading man and his technique behind the camera. Looking like a younger David Tennant but with 50% less charm and zero weight, Raiff wanders through the film in a part that makes him seem like a gee whiz sweet guy that everyone likes. Gosh darn it why can't he get his life together. Its a saccharine part of the sort that only exists in "you can't be serious" romantic comedies. This results in moments that had they been played by any other actor or written by any other writer might have seemed remotely real instead of artificial.

And it's a shame be because Dakota Johnson and Vanessa Burghardt as her daughter are magnificent. They take roles that shouldn't work as written and turn them into something special. They are what make the film work as well as it does.

Yes, despite my bitching the film works as disposable romance. But is should have been better. It also should have had a different ending which seems to be there just to give the proceedings weight. Forgive me, while it may be slightly logical, Johnson is engaged after all, it feels out of place. Yes I know it's the result of the film being from Raiff's character's POV, but it seems wrong and out of left field like many serious works of literature that go serious in the final pages/minutes. But what annoys me is the whole thing outside of Johnson and Burghardt are not far removed from a sitcom so it didn't have to end real. (Yes know it's foreshadowed in conversations but it still seems wrong to me)

Worth a look for Dakota Johnson fans or those want to have their socks knocked off by new comer Vanessa Burghhardt. Everyone else you're on your own.