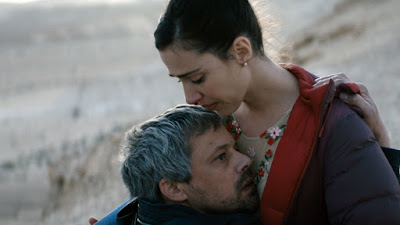 A couple of years ago Nadav Lapid had his film SYNONYMS at the New York Film Festival.  The reaction to the film was to confound the people I spoke with. Some people loved it and other people hated it. The film was the subject for discussion for  a while before it kind of disappeared. This year Lapid returns with AHED's KNEE and  it is in some ways even more frustrating.

The film follows a director  who takes time from a personal project about a Palestinian protester he is working on to screen one of his films in a small desert community. He hangs out with a friend and the Deputy Director of the Ministry of Culture for Libraries who arranged the screening. But life is crashing in on him with issues with his mother and a requirement to sign a document that his film is really about a safe subject and agreeing not to talk abut proscribed topics.

I m absolutely torn about this film. The central thread of the director trying to come to terms with life and the state of Israel is absolutely brilliant. I loved the discussions and the characters. Frankly is it wasn't for the things I will get to in a moment I would consider this one of the best films of the year. However as good as most of this film is Lapid does some incredibly bad things that make me want to lock him in a closet.

The problems with the film begin with the frequent use of a camera style that shifts in and out of POV with in a single shot. We'll be looking at  something and then the camera whips away to look at something else and whips back and then away and on and on. I know it's suppose to make the film feel subjective, but it never works. The camera movement is never close to hw some one looks. The movements feel like they are being made by a camera on rig.

Lapid also has these moments of fancy that mostly don't work. The shift to a night time city street while walking in the desert is fine and works in context but something like the dance bit to Lovely Day is what the f.... At other times the camera does these weird gyration that make no sense, such as when it stops and starts while our hero is walking in the desert and actually bumps into the stopped camera man. Its a show bit that makes zero sense.

Lapid's use of knowing humor isn't always on target. Things occasionally spin out for a humorous moment that really shouldn't be there.

I don't know if Lapid is behind it but I am wondering why about a half an hour in there is a song in Hebrew that isn't subtitled. Its clear that it is suppose to mean something but the print I saw it wasn't subtitled in English so any meaning is lost.

Honestly Lapid has some interesting things to say but he undercuts all of them because he insists on making us aware of  his hand. The result is that by the time the film ends and there should be an emotion catharsis we feel manipulated  and disconnected to what we are seeing. We see the manipulation more than we feel the emotional truth.

I have no idea if I should recommend this because I don't know what I feel about it.