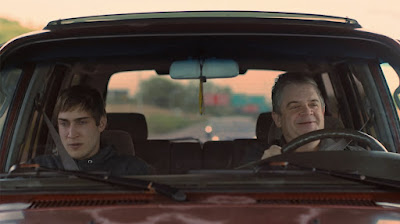 A story of attempted redemption gets complicated in this wildly personal and deliriously funny film. Chuck was not a great father. After his son Franklin gets released from a mental health facility, Chuck is determined to reconnect. Although he has the purest intentions, the way he goes about it could not be more wrong. Chuck decides to catfish him. Sounds like a foolproof plan, perhaps in some other universe. SXSW22 narrative feature I LOVE MY DAD will have you cackling and cringing from beginning to end.

Rachel Dratch provides further levity with her overt sexual intensity as Chucks’s girlfriend. Dratch and Oswalt have an outstanding dynamic. Claudia Sulewski is a spitfire. The way she can bounce off Morosini is magic. Put her in everything. Patton Oswalt as Chuck is a pure joy to watch. Each panged look on his face as he receives messages not meant for his eyes is visceral. He is charming as hell, and you can’t help but root for him. Writer-director and star James Morosini‘s personal story lands between heart-warming and cringeworthy, and every minute is wonderful. He is mesmerizing. Wearing his heart on his sleeve is one thing, but his willingness to embrace the slapstick comedy is on another level.

The script is super unique. Comedy aside, I LOVE MY DAD melds a story of mental health, self-worth, and connection. Including a particular track from The Cure has more weight than I first realized. The transitions when Becca/Patton begins to chat with Franklin (and vice versa) come out of left field, and they are gloriously creative. You will not be able to contain yourself. Either way you look at it, Morosini is pretty brave for putting this stuff out there. If this doesn’t get Hollywood’s attention, I’ll be shocked. As we bounce from sweet to outlandish, I LOVE MY DAD is one of the best films to come out of SXSW22.