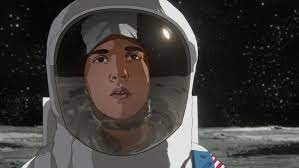 Richard Linklater remembers his childhood growing up near NASA in Huston and blurs it with his own dream of going to the moon.

This is the story of Stan ,who when he was kid was recruited by NASA to fly a secret mission to the moon in the days before Apollo 11. In and around that story Stan remembers what life was like being a kid.

How you react to this film is going to be determined by how you react to this pure shot of nostalgia. If you are of a certain age, Particularly if you came of age  during the late 1960's and early 1970's this film is going to be a waking dream of what your life was long ago when it was okay to paddle kids, ride in the back of pick up trucks and do all sorts of crazy things that would get you or your parents locked up today.

My experience watching the film was purely talking to the screen and saying "yes, yes exactly" while smiling with utter delight. A form of this film was my childhood and as a result I ate it up and I was five or six years old again.

On the other hand if you are far removed from the days depicted you may not have any connection to what is happening on screen and the fragmented nature of the (shaggy dog) story you may like it less. I completely understand not liking the film because without the nostalgia factor the film doesn't add up to much. I mean there is no grand payoff. This is just several weeks in the life of a kid in 1969 with no real arc.

Oh hell no. Even the people who had no nostalgic connection to the film liked the film, they just didn't love it.

Worth a look when it hits Netflix April 1