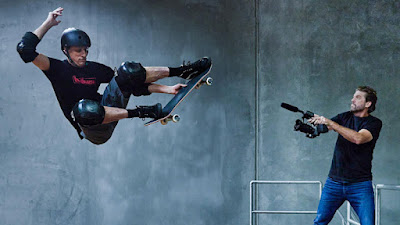 This long loving tribute to a man who helped take skateboarding into the stratosphere retells his life story via friends, family and the man himself.
How you react to the film is going to depend upon your love of the subject. If you’re a big fan odds are you are going to love this, if not this is going to be something you want to pass on. While I like Hawk I drifted off somewhere toward the end of the first hour. Frankly while I think Hawk should be celebrated I don’t know that many people who are going to be willing to sit for a two plus hour biography. I kind of knew I was not going to be the audience for this film right at the start as we watch Hawk try repeatedly to do a trick over and over again and crash again and again. While Hawk has patience to do the trick over and over I didn’t have the patience to watch him do it over and over.
To be fair the film is never bad, it’s just wildly over long and not aimed at being for any one except fans.
Posted by Steve Kopian at March 16, 2022