Nate Hood on The Batman 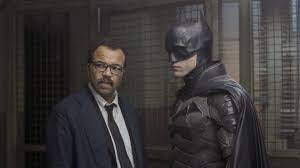 “Don’t pay back anyone for their evil actions with evil actions, but show respect for what everyone else believes is good. If possible, to the best of your ability, live at peace with all people. Don’t try to get revenge for yourselves, my dear friends, but leave room for God’s wrath. It is written, Revenge belongs to me; I will pay it back, says the Lord.” (Romans 12:17-19 CEB)

Not including early Hollywood serials, animated films, and guest appearances in ensemble crossover movies, Matt Reeves’ The Batman is, incredibly, the ninth movie to feature DC Comics’ caped crusader. Few characters have survived for so long through so many permutations, from candy-coated camp curio in the Sixties to abrasive post-9/11 avenger in the Aughts. Reeves had his work cut out for him—how can you make an original take on a character that has been pushed, pulled, stretched, and distorted in every way imaginable? His answer wasn’t to attempt anything new with the Batman character itself. Instead, Reeves sought to interrogate the very purpose of the character, poking and prodding at the inherent moral murkiness of a billionaire who devotes his life to exacting brutal extrajudicial violence on poor and desperate criminals. Christopher Nolan’s Dark Knight trilogy occasionally flirted with these ideas, but it’s here in The Batman where they take center stage.

The film begins two years into Bruce Wayne’s (Robert Pattinson) reign as Batman, and in that short time he has already become a fearsome figure of legend among Gotham City’s underworld. In an astonishing opening sequence, we see how criminals all over the city are more cowed by the sight of the Bat-Signal than any number of Gotham’s police officers. But Wayne is privately despondent—for every criminal he puts away it seems two more take their place. In these two years, Gotham has somehow become even more violent and dangerous, best exemplified by the sudden appearance of a serial killer named the Riddler (Paul Dano) who begins his terrible reign by murdering the mayor. One by one the Riddler picks apart Gotham’s elite, kidnapping high-ranking government officials and live streaming their murders. At each crime scene he leaves cryptic clues detailing his victims’ place in a web of corruption reaching into every corner of Gotham. Who is the Riddler? How does he know so much about Gotham’s corruption? And why leave riddles and puzzles instead of sending his evidence straight to the press?

These are questions that haunt Batman as he seeks to stop the Riddler’s reign of terror, finding aid along the way by Lieutenant James Gordon (Jeffrey Wright), the one clean cop in Gotham, and Selina Kyle, nightclub waitress and infamous cat burglar Catwoman with a very personal vendetta against the city’s criminal underground. Though their means vary, all three are desperate for justice. But as they dive deeper into the city’s labyrinthine corruption, it becomes apparent that the Riddler considers himself one of their number. Unlike previous iterations of the Riddler as a criminal madman who leaves riddles to prove his intellectual superiority, Dano’s Riddler wants to clean Gotham of crime. How, then, is he any different from Batman, the film asks? Does the fact that the Riddler kills and Batman doesn’t make one more righteous than the other if they’re both working outside the law? And even more insidiously, is the Riddler helping Gotham

more by preying on the kingpins at the top instead of on the desperate pawns at the bottom like Batman?

Such questions have biblical precedence, as issues of good and evil, of justice delayed and denied despite the power of an all-loving, all-knowing God can be found throughout scripture. They’re so prevalent, in fact, that they form an entire branch of theology known as “theodicy.” Such questions are particularly prevalent in the Wisdom Literature of the Old Testament where figures like King David, King Solomon, and Job rage against the unjust suffering of the righteous. But one of the most famous verses addressing this issue can be found in the twelfth chapter of Romans where the Apostle Paul quotes the Book of Deuteronomy to remind readers that revenge and justice ultimately belong to God. Famously translated in the King James Version as “Vengeance is mine; I will repay, saith the Lord,” the passage isn’t a macabre warning about the destructiveness of a wrathful God. Instead, it’s a key to free ourselves from the shackles of resentment and hatred. As Christians, we are supposed to fight for justice wherever we see suffering, but vengeance is the Lord’s because only God can repay the wicked without being corrupted. Or, to put it another way, only God can punish evil without becoming the Riddler.

There are many reasons to recommend The Batman. Its careful pacing and expressionist cinematography don’t just make it the most thrilling Batman film since The Dark Knight (2008), it’s a veritable breath of fresh air in an industry glutted with visually banal superhero films with plots that feel written by committee. There are sequences here that are seared into my brain: the Batmobile emerging from a wall of fire, pitch-black hallways illuminated by gunfire, Batman leading a cobweb of humanity to safety through chest-high waters. Is it too long at nearly three hours? Almost certainly. But unlike many modern bloated blockbusters, The Batman earns every minute of its length. And even more importantly, unlike many of its peers, The Batman is a superhero film with something crucially important to say
Posted by Steve Kopian at March 16, 2022