Liz Whittemore of Reel News Daily on SXSW's THE PRANK (2022) 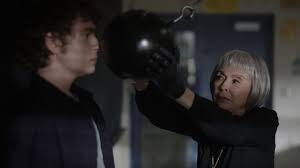 We all had that teacher in high school that we loathed, either because they were a terrible teacher or just plain evil. In The Prank, two students sick of an AP Physics teacher terrorizing the school come up with a scheme to frame her for murder. Can Ben and Tanner shift the power dynamic? More importantly, how will Mrs. Wheeler react?

Ben is your typical overachiever, while his best friend Tanner is a slacker. Funny thing, neither is what they appear to be. Tanner is a hacker genius. When the infamous teacher from our nightmares, Mrs. Wheeler, discovers someone has cheated on her Physics midterm, she threatens to fail everyone. Fed up with the power she holds, Ben and Tanner make a plan to take her down. A handful of ridiculous memes and embarrassingly fake “evidence” spirals out of control. But that’s just the beginning of The Prank.

Connor Kalopsis plays Ben with visceral anxiety in his attempt at a scholarship. His quiet confidence is a solid foil for co-star Ramona Young. I would be remiss to mention Meredith Salinger as his Mom. She’s quickwitted and down-to-earth and would have loved to see more of here. She’s a charmer.

Ramona Young as Tanner is a spitfire. With excitable energy, she bounces off of Kalopsis without ever getting campy. Their chemistry is akin to any series regulars on The Disney Channel or Nickelodeon. Kate Flannery plays the lunch lady with a sass that deserves a standing ovation. The scenes between her and Young, while short, are undeniably memorable.

Rita Moreno brings this Goosebumps-friendly film to life with her iconic character-building abilities. Her comic timing is legendary. Her presence onscreen and onstage is massive. She nails every beat of Mrs. Wheeler. Playing against Kalopsis and Young, her ability to outwit her scene partners is unmatched. Moreno captures the familiar sternness that made us shake in our boots when we were younger. Her acid-tongued delivery of screenwriters Becca Flinn-White & Zak White’s dialogue is chef’s kiss. You’ll love to hate her.

The Prank takes advantage of the classic rumor mill, updating it through social media. Without spoiling the film, the fallout that makes this film special. It was a surprising selection for SXSW22 but in a good way. The Prank is the most fun teen-centric comedy at this year’s festival. Stick around for the credits.

For more from Liz and Reel News Daily go here.