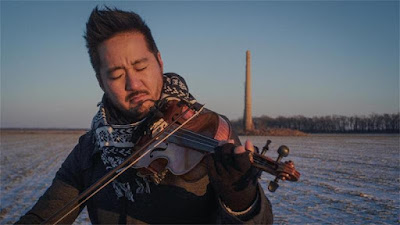 This film is a number of things at the same time. It is in part a biography of musician Kishi Bashi. It is part a concert film of Bashi in concert. It is also a look at the internment of Japanese citizens in camps during the Second World war and how that sort of cruelty is being continued in the wrongful imprisonment of many people today. It is also a moving experience.

I’m kind of shocked that this film works as well as it does. Its not that that the various threads are bad, rather it takes a skilled hand to weave all of the parts together into something that doesn’t feel forced. That it works as well as it does is due entirely Kishi Bashi and his music  which tightly tie everything together.

While most people are going to come to the film for the music, the really surprising thing here are the moving stories that we are told about the internment. As some one who has read a bit about the interment there were colors and shadings I hadn’t run across before.  Its nice to know that even when one thinks one is steeled about a situation you can find out facts that make you gasp.

As for the music it’s wonderful. I was not a fan going into the film, however not long after coming out I was on line trying to get some music for myself.

This is one of my favorite films at SXSW.