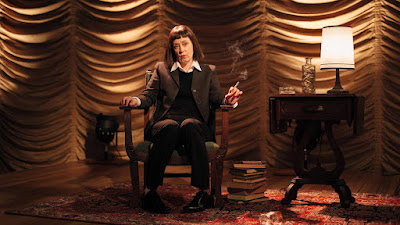 The film is two moments in time. The first is a 92nd Street Y talk McCullers is giving right after the publication of her second novel and the other is McCullers speaking 25 years later just before her death. The dialog is very deliberate and intentional. She is clearly lecturing us as well as exorcising demons. Now and again she sings a song. The result is a show that is its own thing. I'm not sure that's a good thing since it never stops being formal.

The problem with this film is it is artificial. I'm certain this is would have worked better on stage but on on screen we can't suspend disbelief. The lecture format that worked on stage did not translate to the intimate nature of film, especially when we are up close and personal for the entire time. It also makes the sudden appearance of songs jarring. Where the original 2011 show had Vega splitting time between herself and as McCullers, this show now is all the author. This makes for some weak moments in the early going as Vega is not a young woman of 24. Its her appearance, but rather Vega performers role as if she is a much older, and matronly woman, (this probably should have been just the late in life talk). It never felt authentic.