THoughts on the first episode of THE LAST MOVIE STARS 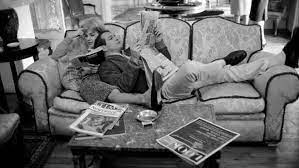 I am not certain what I think of Ethan Hawks series on Paul Newman and Joanna Woodward. To be fair I only watched the first episode but it kind of left me scratching my head.

The series is a look at the long married Hollywood couple  as seen via footage from their various appearance on TV and in film, mixed with interviews the couple did, plus interviews with numerous stars of today who speak of the couple and their performances. They breakdown how they did what they did and the effect that they had on popular culture and the world.

Made during covid the film is a mix of traditional film biography and Zoom interviews. It’s a film that is rough around the edges as polished clashes with unpolished. Some of the Zoom material looks more like friends hanging out instead of your typical talking head presentation. While this allows for some magnificent moments (Vincent D’Onofrio explaining what Method Acting involves is beyond words good) some of it feels like it could have been trimmed.

Actually after watching the first episode I’m left to ponder how they are going to get five more hours out of the material.

Worth a look for those who are curious, as for me I’m not sure what I’m doing.