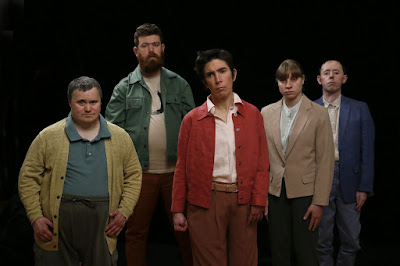 I don't know how to describe SHADOW. The film is a film about a meeting of disability activists who come together and argue about how best to get the respect that they deserve. It's an meta exercise with it clear that this a film and that there are people with disabilities before and behind the camera. It is also very formal much like a stage play.

Most assuredly a one of a kind film I find it impossible to really parse out my feelings for it. Part of it is that the performances would be considered all over the place owing entirely to the ability of the people on screen. Additionally the script is not natural, it is a polemic that is very much trying to present an argument.  As a result some of it is absolutely brilliant while other bits are noble misses.

Honestly it's wrong  to even try and critique the film simply because of so many issues. That isn't to say it's bad, it isn't, rather it's something that may not work for everyone.

Personally I like the film but I admire what it is trying to do more. I think the film and it's giving voice to the people it wants to empower is important. While some of this will move you, most of this is going to work best in your head where the ideas and debates can play out .

Definitely worth a look, this film is vital and alive in ways the vast majority of films can never hope to match.