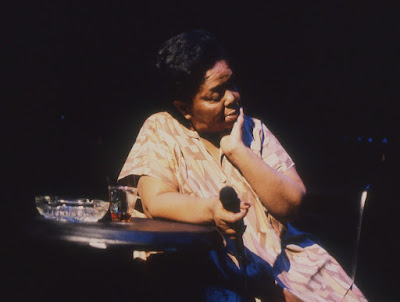 CESÁRIA ÉVORA is a portrait of the  singer and her life. Its full of great music and the weird turns of her life.

To be honest I’m mixed on this film  While I absolutely love the music, my ability to deal with the hard living ÉVORA was limited. Always wanting to have a good time she is always drinking and smoking and touring. Generous to a fault she gave away her fortune many times over. She is incredibly irresponsible, at one point taking the money for her new home out of the bank and then going out and giving it all away. One person tells of the he being non-plussed by the collapse of her home while she was on tour. Her attitude was everyone was safe so why worry about it.

The real problem with the film is that as feature portrait of the woman it doesn’t seem to go anywhere. Yes we get to know the woman and hear her wonderful songs, but at a certain point there isn’t a reason this needs to be a feature. Yes she accomplished a great deal but organization doesn’t really give us a reason to continue watching. It’s a lot of stories that all sound similar. After a while I tuned out. This is the sort of thing that would have been a great short but as a feature there isn’t enough here

Frankly I was disappointed.