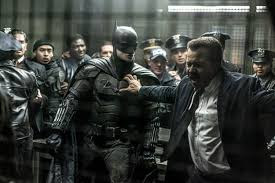 Just noting that I have seen The Batman and I really liked it.

I won’t say that I love the film. I have issues with the narrative  which is a bit bumpy. For example I don’t think the Riddler really is fully formed as a character, the move to the epic with the destruction of the sea wall feels like it’s a narrative reach and the fact that Riddler hid his intention under an old rug tacked in place under old wood is a bit much. I also wish there was a bit more interaction between Bruce and Alfred, while we can infer the bond, and touching moments in the second half there is a bit too much unsaid.

On the other hand the action set pieces kick ass, the movie moves like the wind and it looks right.

Robert Pattinson may also be the best Batman ever put on screen. He is not just a bad ass crime fighter but one with the city. When Selina talks about Bruce not being able to leave because he is attached to the city we know it’s true.  This the first live action film where Batman is part of the city and among the people. Yes we see him with the cops, but we also see him helping real people. He is not aloof (ala Adam West-who is the only one who dealt with citizens) but a  regular guy.

The reality is that this is the first film that, to me, feels like it’s the 80 year old character and not just a mythic figure  fighting far off crime, The moment when he leaps on the live wire that is going to electrocute everyone, cuts it and falls is the moment he becomes not a crime a crime fighter or vigilante  and becomes true hero. Rising from the water and striking the flare becomes the man leading Gotham out of darkness. For this life long Batman fan  it was the moment where the onscreen character become the figure that lives in my soul.

Over all The Batman is a winner and worth a look,