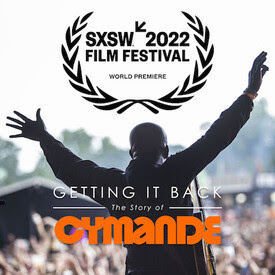 Finding films like GETTING IT BACK: THE STORY OF CYMANDE are why I go to festivals. Its the reason I shy away from the big films and root around in the films that are not the ones that everyone instantly graviates toward. Its the sort of film that I love to find and push at people who don't want to see it until they are broken and they give in and watch it. I then like to watch their reaction as their eyes go wide and they go "oh crap, that was great! Why aren't more people talking about it?"

In the case of GETTING IT BACK the film is just World Premiering so there has been no chance to spread the word becase of embargoes and such. That said as soon as I finished watching the film in the SXSW press library I started emailing friends and aquaintances to have them put it on their radar. I then spent four hours talking about it to my family members and the odd store clerk. I know we are supposed to be under embargo with our reactions but to hell with that some films are just too good not to say a word.

There is a good chance you probably don't know the band Cymande.I had no idea who they were going in. They were funk band formed in England in the 1970s that stayed together for a few years before breaking apart and coming back together. While the band drifted apart, their music astayed around as the beats and riffs were sampled by ther artists and DJs who knew what was good continued to play their songs.

GETTING IT BACK is nominally the story of the band. In reality it is the story of the last five decades of music since the film smartly focuses on how the band influenced everything that came after them. The result is a film that is always alive, and strangely never nostalgic.  The bend toward nostalgia is something that curses many music documentaries since they become a greatest hits package and not the tale os a still living and breathing group.

I have no words for this film beyond "WOW" and this is going to be on my best of the year list. This film came out of nowhere and just floored me. I had no plans to watch the film but somhow it fell in my lap. Honest to god I had zero intention of watching the film, I just pulled it out of the SXSW press library simply to watch while I had breakfast. I quickly fell in love with the film to the point where I stopped eating and just stared at the screen, mving my bdy to the music as it drifted out of the speakers. (I am sooo jealous of everyone seeing this on a big screen with a great sound system)

While this review may not be the best there is, I assure you that GETTING IT BACK: THE STORY OF CYMANDE is on of 2022's. It is a magnificent film that will haunt you and have going on line to get the music played in the film, and everything else Cymande recorded.