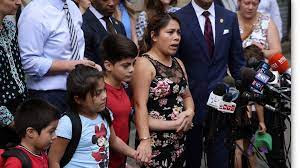 A look at the US policy under Donald Trump to separate illegal immigrant parents from their children. It focuses on the plight of several women who had their children taken away as well as the mothers turned activists  who fought to reunite the family. The film focuses on how mothers from across America came together to create Immigrant Families Together (IFT)which was aimed at working to get the separated families together anyway they could. In the case of Yeni Gonzalez the women drove her across the country in stages in order to get her and her kids back together

This is a good but not quite quite my cup of tea film that kind of disappointed. While the film tells an important story, I never really connected to the story, the problem, for me, being that I never warmed to the women in IFT.  I also completely understand that it was impossible to really follow many of the turns in person owing to the inability to film in various official facilities., but I kept wanting to see more.

Frankly the problems come from seeing a steady diet of similar films and as a result I unintentionally have compared it to other films while not taking it entirely on it's own terms. On the other hand if you are not an insane film watcher like me you may want to give the film a try