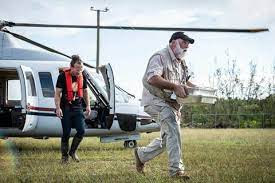 This is the story of chef Jose Andres who began feeding people in need in 2010 when an earthquake hit Haiti. As a result he ended up starting World Central Kitchen which travels the world and wades in to disaster areas and feeds the people in need.  He is a man who takes his company where ever people need to be fed.

And while this is very much the story of Andres this film is also the story of a lot of people doing good. Its the story of World Central Kitchen and the people who go out of their way to make sure people can eat. It is a story of hope and humanity in a world of darkness. In a world of pain they will make you feel good.

I was moved to tears. I was rocked by Andres attitude of we have to help anyway we can- and then his just wading in to do it anyway he can. He went in in the early days with no plan and made it up as he goes. Its the way he runs its business and it has allowed him to make a difference when officialdom won't move fast enough. I love that he takes what he learns and changes as as he goes along and as each situation presents itself. You get a sense that he really wants to help and not feed his ego. This is the way we should all be. We should look to see what is really possible, not what we think is possible.

This is a magnificent film.

I don't know what to say except see this film. One of SXSW's best and one of 2022's most important