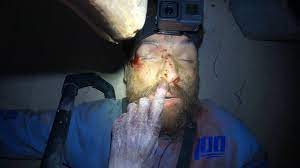 After a public controversy left him disgraced and demonetized, a washed up internet personality tries to win back his followers by livestreaming himself spending one night alone in an abandoned haunted house. When he accidentally pisses off a vengeful spirit, his big comeback event becomes a real-time fight for his life (and social relevance) as he faces off with the sinister spirit of the house and her own powerful following.

Joseph Winter plays Shawn, a delightful douchebag. Or, as we regularly refer to this type of personality, a YouTube star. He promises his audience he’ll spend the night in an infamously haunted location. As the evening unfolds, Shawn’s backstory slowly comes to light. Is this stunt an act of redemption or a money grab? Whichever it is, we win with Deadstream.

Shawn interacts with the livestream comments ranging from rude to fangirl, skeptical to genuinely helpful. Some of those comments come with videos making the narrative feel immersive for the audience. The Host was a huge indie hit in 2020. The plot occurs over a Zoom seance, where the audience is also a participant on that call. Dreadstream benefits from this similar format because it will feel like you’re part of the action. It’s only the second film I would recommend watching on a laptop.

The cinematography is a collection of Go Pro and infrared cameras, giving Deadstream a first-person gamer experience. While Shawn performs promised acts of silliness, he also tells the history of each room and its associated ghost. The majority of the set is lit from Shawn’s headlamp, enhancing the scares. I constantly anticipated a jump scare. But, it’s the brilliantly written buildup of tension that kept me on the edge of my seat.

Joseph Winter abandons every ounce of his dignity in Shawn. He’s fearless in his slapstick and could not care less how absurd he looks. The way he screams is comedy gold. Winter nails that manic energy and the over-the-top vocal nuance of any YouTube star or influencer. I cannot imagine anyone but Winters doing Shawn justice.

Deadstream is an ode to horror fans. It is a film Sam Raimi would be proud of. As for us genre nerds, don’t act like you didn’t watch Paranormal State, Ghost Hunters, or Ghost Adventures whenever Evil Dead wasn’t available to rent, again. Deadstream takes all the elements of those staples and melds them together with modern-day social media and cancel culture. If you’re not laughing out loud, check your pulse. Writing and directing team Vanessa Winter & Joseph Winter let SXSW22 audiences in on the joke. Deadstream gets me to hit “Like & Subscribe.” These filmmakers just earned a new fan.

For more from Liz and Reel News Daily go here.