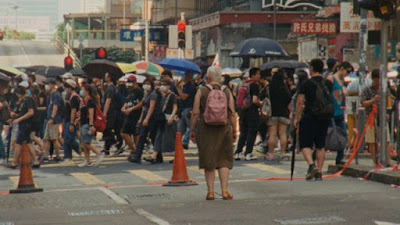 A German woman decides to travel to see her children, and her son in Hong Kong who said he has been unable to come home because of the Pro Democracy Protests

This is beautiful film with a glorious sense of place. Frankly I've rarely felt Hong Kong as a real a place as it does here. The forests of Germany are  the sort of thing that we can reach out and touch. It is a film that is alive and full of the  life.   I would  love to see what director Jonas Bak would do if he was allowed to create a mythical world.

How you react to the film as a whole is going to be determined by how you react to the films meditative style. The film is not one full of hills and valleys but a it's a steady straight line. It moves like life, there are no grand moments, however there are small revelations that work together to create a real emotional punch. When the film ended I was forced to consider the film more than if director Bak had put a bow on anything. Days passed and it was still haunting me.

While probably not for all audiences for those who want a quiet film that will haunt them this is very  recommended.