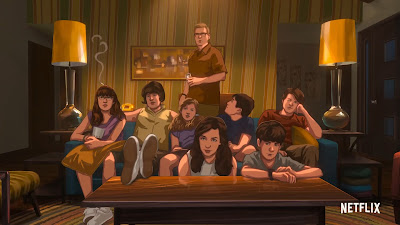 Richard Linklater has made his career off memories. Whether it’s allowing a certain subset of viewers to grow up alongside Jessie and Celine in the Before Trilogy, capturing 12 years of a boy growing up in the suburbs of Texas in the 2000s with Boyhood, or flashing back to the teen-aged 70s in Dazed and Confused, Linklater’s films are always specific and unflinchingly sincere. It’s this exact, highly-attractive quality, though, can make them alienating to certain viewers. His latest, the animated Apollo 10 ½, is no exception.

Set in the height of the space race and right at its geographic epicenter, the film takes viewers to Houston, 1969, and it puts Linklater’s memories front-and-center. The plot is rather simple: NASA recruits a young boy, Stan, to train and venture into space due to the fact that they built the cockpit on their latest rocket too small for an adult to travel in it. Stan’s training and journey are interwoven with his own adult’s memoir-esque narration of his life in Houston at the time. Filled with highly-specific and long-winded detours into different foods, TV shows, games, and everything you may imagine about the Houston suburbs at the time.

Clearly highly-researched and diligently remembered, Linklater pours as much of himself and his childhood into this as he can, making the detail remarkable and often fascinating – at least until he has dragged it on too long. His remembrances grow rather tedious for viewers who delight a little less in the treasures of a different generation’s past, and it is clear his indulgences have gotten the better of him with this film.

I had, in viewing, the reaction I can only imagine many others have had when approaching different films of his like Boyhood, School of Rock, or Dazed and Confused: this isn’t for me. Linklater’s passion for the period helps ease some of the pains, and the animation is often a marvel, especially the space sequences and when Stan is home with his family. There are enough pieces to enjoy in here, even for those who find the unceasing attention-to-detail rather boring.