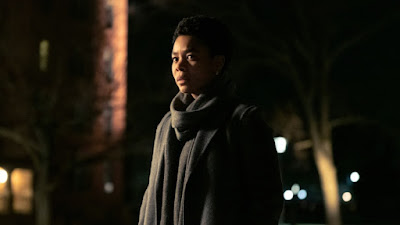 I don't know what I think of this film. Its one part social commentary and, occasionally, a horror film. Its a film that sets up the story of a ghost who haunts a certain college dorm room who takes a victim every year at a certain time. The film also seeks to address the racism, overt and "unconscious", that one finds in academia.

The main problem is that the film doesn't blend the genres. I mean it doesn't really blend them at all. Some scenes are supernatural tinged,  but in those minutes there is no social commentary. In the social commentary moments there is no hint of the supernatural. The result is there never is any tension because the film never gets traction. Every time it begins to build to something it shifts gears...nay flips a switch.  The result of it is a lack of engagement.

The other problem is that the film can be incredibly low key, especially in-regard with the supernatural. The result is that when we reach the ending, the revelations are more like, "wait what?" instead of "oh my god". I should have been shattered instead of waiting to see if that was all there was.

While I know some people who liked this film, it really didn't work for me.