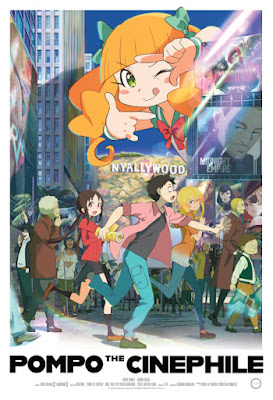 The great producer Pompo tasks he harried assistant with turning her deeply meaningful movie script into an award winning film.

While named for Pompo and while her presence hangs over the film, the reality is she is a secondary character to Gene, the assistant who is tasked with directing the film. This is Gene's story about getting to do the think you always wanting to do and following it to the end.

This is a really good film. For those that love the movies it is full of movie references from start to finish. Everything is seems to refer to some other film. I spent half of my time watching the film and half the time scanning for some film reference. For those who are less knowledgeable this film is still a blast, with the crazy happenings and compelling story line.

While I really liked the film a great deal I'm not going to pretend there aren't problems. The structure of the film feels odd at times as it throws down a lot of plot threads and seeming leaves them alone until picking them up at the end in order to get the perfect ending. On some level there is too much going on with the result that there are things that could have been cut out. Its not fatal it just makes the film feel less tight than it probably should.