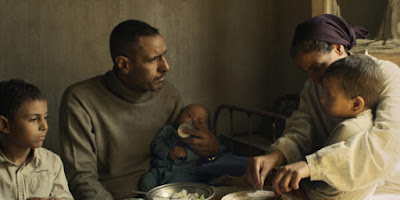 Bleak black comedy about a woman  dealing with her family and her patriarchal husband who has to contend with a new set of circumstances when the husband is turned into a chicken.

I know I used the term bleak at the top but this film really is. As absurd as it is I never laghed finding the woman's plight crushing beyond words. Set some where beyond Eygpt in a town that is a sytopian as they come our heroine silent puts up with the stupidity of her husband and the uncaring nature of the rest of the world.

Writer/director Omar El Zohairy has made a film that is  one of the most tactile that I've ever  run cross. It feels like a real place and real family. If you need me to explain consider that there were times when I wasn't sure if this was a documentary or a narrative.

Forgive me for not saying a great deal about the film but I really don't like how this film made me feel.