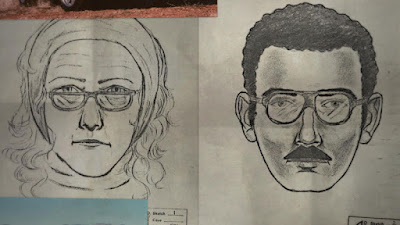 Thief Collector is a film that is not what you expect. The film is nominally about the theft of  de Kooning’s painting Woman Ochre from the University of Arizona in 198-. The painting was cut from the frame and carried off by a couple not long after the museum opened on the day after Thanksgiving. Where it went or who took it remained a mystery for decades…until it was rediscovered in the effects of d Rita and Jerry Alter.

I should point out that this is not saying that the Alters were bad in that they were secretly murdering people, rather they simply had a side where they went against the fine upstanding citizens they seemed to be to the rest of the world. As a result the film has become a more complicated and richer film than it would have been if it had just been about the crime.

I really liked this film a great deal. It’s a film that stayed with me through an evening in which I watched three other films after it. Yes I saw an other documentary and two edge of your seat thrillers, but when it was all done I found I was still thinking about Thief Collector even as the other films were fading from my mind. Hell I wanted to know more and I reached out to the PR person to get the press notes because I knew that they would give me even more details.

You have to love any film that takes it’s basic premise to hook you and then drags you into another direction and makes you think about things in a new way. It had my mind going so much that I wish I could have gone back and rewatched several other SXSW films that dealt with obsessions because it put those films into a new light.

This is a neat little film and is highly recommended.