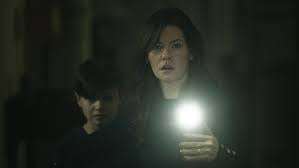 Filmed on location in Roscommon, Ireland, The Cellar tells the story of Keira Woods (Elisha Cuthbert), whose daughter mysteriously vanishes in the cellar of their new house in the country. Keira soon discovers there is an ancient and powerful entity controlling their home that she will have to face or risk losing her family’s souls forever.

Shudder original The Cellar made its debut at SXSW 2022 in the Midnighter’s section. Elisha Cuthbert helms this haunted house film alongside Eion Macken. As a husband and wife team working on a new Gen X influencer platform, their strangely inexpensive Irish mansion comes with more than some old furniture. With Mom and Dad busy pitching their ideas, kids Ellie and Steven are home alone when the power goes out. As Ellie descends the creepy stairs of the pitch-black basement in search of the fuse, she mysteriously disappears while on the phone with Kiera.

Writer-director Brendan Muldowney made a short film in 2004 titled The Ten Steps (which you can find online.) The short film is horror perfection. The Cellar is a feature expanded from that story. The Ten Steps captured all the fear in 10 minutes. The Cellar takes a lot of cliches that genre fans will love, and frankly work well, and becomes an overlong and dimly lit film. As a mom, I felt Cuthbert’s sense of urgency was missing. These parents are the least panicked Mother and Father I’ve ever seen. Where are the missing posters? No tears of distress?

As Kiera investigates the house’s history, we are introduced to everything from Jewish mysticism to quantum physics. I wasn’t expecting math to be a thing, yet here we are. I thought the record player that coaxed the family members into all sorts of trouble was clever. But, not so much the characters googling Latin quotations. It’s a lot. There are fleeting moments of greatness, such as an ancient abacus moving on its own, air blowing from underneath the cellar door as if a creature were heavily breathing. The classic scares worked best for me. The final 20 minutes is where the real action occurs, a clear nod to The Beyond. This is what I was waiting for, and it is genuinely satisfying. The visual change-up was an honest “Hell, Yes” moment, no pun intended. The Cellar is ultimately a film Shudder audiences will dig. So, simply sit back, don’t overthink it, and enjoy the devilish chaos.

*Perhaps ignore the fact that it will remind a few of you of Krampus.

More from Liz and Reel News Daily can be found here