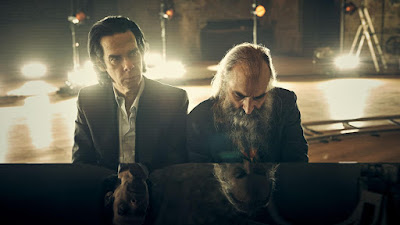 THIS MUCH I KNOW TO BE TRUE is Nick Cave & Warren Ellis performing songs from the albums Ghosteen and Carnage. Its a performance film shot over five days before they took it on tour.
If I told you this film is a religious experience, you would think I was daft, unless you've ever seen Cave in concert. I've seen him twice and this film is kind of like that. It's the point at which music transports one to another place without the need of drugs. The visual tricks are simply the space, lighting changes, camera moves and the performers. Yes there are a few interstitals where they discuss what they are doing, but they are merely points to collect ourselves. In all seriousness moments in this film moved me to tears-the beauty of the sound and image took me to somewhere beatiful. The reason was somewhere beyond words.
What stays with me is the soundscape. This is a film I know I will watch hundreds of times in the time I have left simply so I can have the music swimming around inside me. This is a space occupied by very few films, the closest is the Sigur Ros documentary HEIMA which creates a sonic space that is pure magic.
I apologize but this film lives in a place beyond words. I can't explain it I can only feel it. And I feel it deeply in the bottom of my soul.
You must see this film with as good a sound system as possible. (I am cursing myself for not putting on headphones.)
One of the best films at SXSW and 2022 as well.
Posted by Steve Kopian at March 13, 2022