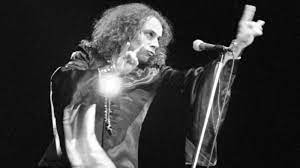 DIO DREAMERS NEVER DIE was not one of the films I picked for the SXSW dance card. It was so low on my must watch list as not to be on it. Frankly I had no idea the film was playing at all. Then somehow I noticed it when I was putting things on and off my must see list and added it simply because it fit a slot.

The film is a portrait of Ronnie James Dio who was born as Ronald James Padavona in 1942. He began playing the trumpet before starting in the sort of bands you'd expect in the 1950's.  Then influenced by Deep Purple he changed the sort of music he was playing before shaking the pillars of heaven in groups like Raonbow, Black Sabbath and Dio.

This film transcends the notion of what a music documentary is supposed to be. This is a portrait of the man from birth to death with everything in between. All his music is represented, yea even the early stuff is here with the result  we truly realize what the man was doing musically. It also is a lovely portrait of the man who is seen to be a guy who stuck to his guns, helped anyone on the way up where he could, even if it was a kind word, and he was a man who loved his fans. The story is told of Dio going on tour and meeting fans and blowing them away by remembering, after years, who they were and what they talked about in prior encounters. He loved his fans and they loved him.

Yes the film is primarily full of heavy metal music, but don't let that worry you, it's never there just to be there. Dio's music is not used just to play it but for effect and to illustrate what he was doing musically. They pull his lyrics apart and you realize just how stupid the religious nuts who tried to claim his work was Satanic were. Yea it was driving music but he was telling people they mattered.

This film stunned me from the first frames. I expected to like it but I never expected to fall madly in love with the film and the man. Its so good that I want to know more.  Honestly I am not more in love with his music, he was never one of my favorites, but I am in utter awe of the man.

This is truly one of the best music docs I've seen.

I can't recommend this film enough. One of the highlights of SXSW