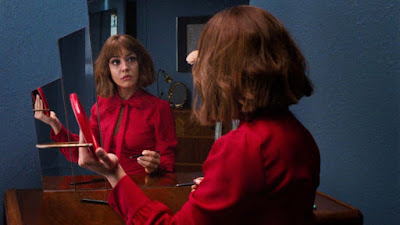 Superior feels like a film that would have been a low budget film from 1987 when the film is set. It looks and moves like many of the slightly more ambitious films of the period that were trying to do more than be a by the numbers thriller. Its and interesting throwback that is well done but strangely not as clever as it thinks it is.

The plot has sisters Ani and Alessandra Messa playing sisters. They haven’t seen each other in 6 years when one of them shows up at the house of the other needing a place to crash. She is on the run from an abusive boyfriend. As time goes on the pair rekindle their closeness and eventually begin to merge and swap personalities to the point that the people around them can’t tell them apart.

Superior is a film I admire more than I like. It is a meticulously designed film where every image is perfectly presented. I suspect that if there had been enough money the whole film would have been shot on artificial sets instead of actual locations.  This is a film where writer director Erin Vassilopoulos is doing everything within her power to tell us the exact story she wants. The results in a film that looks splendid and feels like it was 35 years old (that’s a compliment)

The trouble is the plot isn’t anything we haven’t seen before. There have been variations of it going back to the early days of cinema with notable stops at PERFORMANCE and the works of David Lynch. We’ve been here before enough that the plot doesn’t have any surprises. While it isn’t fatal, its kind of disappointing since so much work went into the design and making sure that by the end of the film we can’t tell Messa sister's apart. The result is a film that is not good but great.