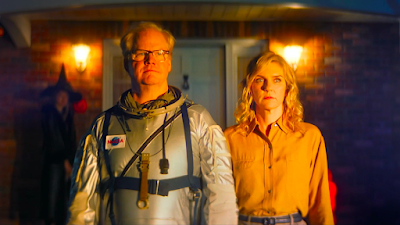 I described my thoughts on LINOLEUM in a tweet to Liz Whittemore (who had seen the film before me and insisted I see it) as follows:

"Its one of those films you get to the end and then suddenly realize what you thought you were watching is not what it is but something else because the whole thing is this trip that... yea...and its one of those films you need to see again to discuss because the first time through you are not so much seeing it as experiencing it...and if I didn't have 12 other films I'd watch it again before reviewing it but thats not an option."

Or to put it another way- this is one of thse movies that's going to leave you slack jawed staring at the screen for a while as you try to process just what the hell you just saw and jonesing to see it again several more times.

Or to put it even simpler- it's a film that will remove spoken language from your brain for several minutes after you finish the film.

I honestly don't know what to say beyond that partly because I don't have the words, but also because I'm still processing the film.

The official plot reads as follows:

"When a satellite falls from orbit and crashes into the home of a dysfunctional family in suburban Ohio, the father seizes the opportunity to fulfill his childhood dream of becoming an astronaut by re-creating the machine as his own rocket ship. While his wife and daughter believe he is experiencing a midlife crisis, surreal events begin to unfold around him, forcing him to reconsider how interconnected their lives truly are"

And that's what it is at the start, but where it goes and how it goes is something else entirely.

I am tempted to try and talk more about the film but I'm not. I don't want to be the one to spoil this film for you. I say that because I know most of my fellow writers are going to tell yu everything- which is their right- but its going to change how you see the film- which is wrong. You need to see this full on with no turns revealed.

One of the gems of SXSW