VENGEANCE IS MINE, ALL OTHERS PAY CASH First Look 2022 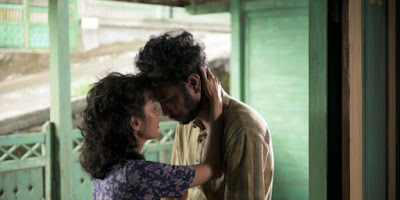 Can a wannabe gangster who fights in the hope of curing his impotence find happiness with the woman who kicked his ass in a fight?

Thoughoughly enjoyable but very meandering genre bending film is going to frustrate those who need a film to be one thing and absolutely delight those who love their boundries pushed. Its a film that you have to bolt yourself infor and just let it take you where it goes.

One part comedy, one part action film, a couple parts of romance, throw in some magical realism a healthy dose of philosophy and some other things picked up along the way and you have a one of a kind film that is kind of like some other films but it ultimately it's own thing. If you don't like yur romances neat then this film is for you because these lovers can't catch a break.

I honestly don't know how to really talk about the film. Certainly it's not easy after a single viewing because watching the film it is constantly changing before your eyes. Not only are genres changing but also the plot is constantly going in unexpected places. Serious becomes comedic and vice versa. This is a film thatkept shifting in my hands as I held it, changing every couple of minutes. I was constantly watching it think "oh so thats what this is" only to have it become smething else.

The truth is you need to experience this for yourself. You need to see the whole thing start to finish so that you too can audibly react to what happens on screen. This is a film that  will make you laugh and sigh and even talk to the screen.

The best thing I can say about the film is this is one of the films that would have blown the roof off the New York Asian Film Fest ten or so years ago.